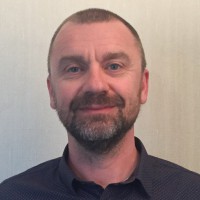 David Rodney is a Professor in the Institut Lumière Matière of the University of Lyon in France. Prior to this appointment, which started in 2013, he was an Associate Professor at the Laboratory Science et Ingénierie des Matériaux et Procédés of the Institute of Technology of Grenoble. Prof. Rodney is an engineer of Paris School of Mines with a M.S. degree from Jussieu University in Paris in Solid State Physics. He received a Ph.D. in Materials Science for research performed at Brown University and the CEA Saclay, and was a post-doctoral fellow at ONERA. Prof. Rodney has been an invited researcher at MIT and the University of Chicago. His research is focused on the modeling of materials at different length and time scales, with a particular emphasis on linking elementary processes at the atomic scale with macroscopic properties. He has published over 80 papers in scientific journals. Prof. Rodney was a Junior Member of the Institut de France and received the Louis Ancel prize of the French Physics Society in 2015.