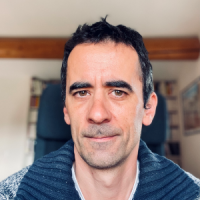 Sylvain Deville is a CNRS research director at the Institut Lumière Matière in Villeurbanne (Lyon), France. He holds a PhD (2004) in Materials Science from the National Institute of Applied Science (INSA) in Lyon, France, where he investigated the low-temperature degradation of ceramics for biomedical applications. He worked two years (2004–2006) at the Lawrence Berkeley National Laboratory (Materials Science Department), prior to joining the CNRS in a semi-industrial research environnement in the Saint-Gobain Research Center in Cavaillon, France, for 13 years (2006—2019), where he investigated ceramic processing, trying to bridge the gap between the fundamental scientific advances and the industrial applications. He co-authored over 90 papers, a book, and a dozen of patents. His current research covers solidification phenomena, and more specifically the interaction of objects such as particles, droplets, bubbles or cells with a moving solidification front, with applications in materials science, geophysics, biophysics, and food engineering.